In copyright cases who “first owns” copyright can sometimes form the nub of the dispute. In New Zealand, the Copyright Act 1994 dictates that “the author” is the first owner of the copyright in the work.

Ownership of Copyright in Commissioned Works 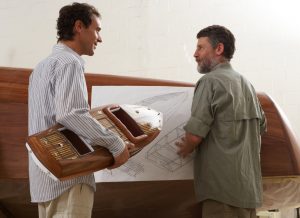 The default position is altered in the case of works produced on commission. Section 21(3) of the Copyright Act 1994 provides that where a person commissions and pays or agrees to pay for the making of certain works (photographs, computer programs, paintings, drawings, models, films, sound recordings, etc) and the work is made in pursuance of that commission then the commissioner is the owner of the work.

But what happens where there is no express commissioning agreement? In a defining judgment in 2003 the Court of Appeal in Pacific Software Technology Ltd v Perry Group Ltd [2004] 1 NZLR 164 (CA) at 173 set out a detailed 6-point set of guidelines providing a general description of the circumstances in which a commission might be implied.

In doing so the Court distinguished between circumstances where, on the one hand, matters had been left so vague between the parties that a supposed commission should not be enforced, and, on the other, where the arrangement between the parties was one where ‘it could only be assumed’ that the work would ultimately be paid for.

In the result, the Court of Appeal in Pacific Software took the view that in that facts of that case it was both necessary and appropriate to imply a non-revocable licence for the client to use prior independent library code developed by the contractor and a term that the licence would enure for the benefit of any successor or assignor of the client. That is, the Court adopted an implied licence approach in preference to an alternative view that all copyright was transferred under a commission.

Seven years later in Oraka Technologies Limited v Geostel Vision Limited (2010) 88 IPR 227 the Court of Appeal had had a further opportunity to consider a set of facts in which was argued that the arrangement between the parties was precisely one where ‘it could only be assumed’ that the work would ultimately be paid for.

In the interim the government introduced into Parliament the Copyright (Commissioning Rule) Amendment Bill 2008 under which the existing commissioning rule would have been repealed. 70 submissions on the bill were made. Ultimately the then government decided not to proceed with the proposal to change the existing law.

The Court of Appeal in Oraka noted (at [36]) with apparent satisfaction, that while the law in relation to commissioning had recently been reviewed, the consultation process did not voice any concerns over the articulation of the commissioning rule as explained in Pacific Software. That decision remains the definitive authority on the subject in New Zealand.

The facts in Oraka were not in dispute. In late 1992 or early 1993 Mr Schwarz, one of the appellants, approached Napier Tool & Die Limited (Napier Tool), one of the respondents, for engineering assistance with respect to a cup assembly for an asparagus grading machine that Mr Schwarz had spent many years developing.

The proceeding the subject of the appeal was commenced after Mr Schwarz allegedly discovered that Napier Tool had infringed the copyright in the cup assembly by manufacturing a look-a-like product for a rival company during the course of its continued production for the Oraka companies.

The ‘unusual complicating feature’ in this case was that Mr Witham gave evidence that Napier Tool’s approach to design work was that it offered a “free design service” so that had Mr Schwarz decided not to proceed from the concept drawing stage to the tooling stage he could have done so without any financial obligation. Napier Tool called customer evidence to corroborate this policy of providing design work free.

Napier Tool contended (and the High Court accepted) that consequent on Napier Tool’s free design service what had taken place was really not one transaction but two. The first – a free service – was the instruction to prepare concept and design drawings; the second was for later tooling drawings and the production of the tool.

Given the length of time that had elapsed since the copyright works, the subject of the dispute were created, the case fell to be determined under the Copyright Act 1962. While the 1962 Act is worded to require payment for the commission to be “in money or money’s worth’, the Court drew no practical distinction between the Copyright Act 1962 and the 1994 Act for the purposes of the expression of the commissioning rule.

The Court of Appeal identified that the issue of whether in law there was a commissioning of the relevant cup assembly concept and design drawings required (1) a request to make the drawings; (2) an antecedent payment or an agreement to pay for them in money or money’s worth; and (3) the making of the drawing. The critical issue, the obligation at element (2), may be express or implied.

The Court took a broad view of the facts characterising it as a case that progressed from the expression of a concept by Mr Schwarz accompanied by some of his drawings and a physical prototype, through to early drawings prepared by Napier Tool that, when approved by Mr Schwarz, were evolved by Napier Tool into far more detailed industrial design drawings which were then utilised to produce a tool. The appellants paid Napier Tool $26,000 for its work.

The Court of Appeal disagreed with the High Court’s construction put on the bare facts of what actually happened. In doing so the Court took into account that Napier Tool had, in a broad sense, utilised Mr Schwarz’s creation. Further, it was only when challenged, and after taking advice and “casting about”, that it came up with the argument that copyright in the concept and design drawings lay with it, as a traverse of a serious allegation of copyright infringement.

The Court accepted that there was no evidence that Oraka made any specific payment for the concept drawings, but said it was sufficient if Oraka agreed to pay for those drawings, either expressly or by implication. The fact that Napier Tool chose not to charge Oraka specifically for the concept and design drawings in the circumstances was not material. The implied obligation by Oraka to pay was sufficient. In commercial terms, the agreement was that if Napier Tool could come up with satisfactory drawings it would get to do the manufacturing work and be paid for it if an appropriate price could be worked out. This is in fact what happened. Oraka was satisfied with the drawings, tooling manufacture proceeded, and a price for that work was agreed and paid. The Court took into account that it appeared Napier Tool had represented to Mr Schwarz that any subsequent tooling would be owned by him and that he would have the right to use that tooling. The Court concluded that it made “everyday commercial sense” for the potential business opportunity (to Napier Tool) to fall within the rubric of “money’s worth”.

In arriving as its decision the Court of Appeal referred, with apparent approval, to the English Court of Appeal decision in R Griggs Group Ltd & Ors v Evans & Ors [2005] EWCA Civ 11 (CA) where Jacob LJ adopted the summary by Lightman J. in Ray v. Classic FM Plc [1998] EWHC Patents 333 of the principles governing the respective rights of a contractor and client to copyright in a work commissioned by the client. In particular, Lightman J’s view that if it is necessary to imply some grant of rights in respect of a copyright work and the need could be satisfied by either the grant of a licence or an assignment of the copyright, the implication will be of the grant of the licence only. In doing so, the Court of Appeal emphasised that there may be cases in which, in addition to the issues around the right to use the copyright works, issues arise of the right to exclude the contractor from using the work and the ability to enforce the copyright against third parties. One of these is where a contractor creates a work which is derivative from a pre-existing work of the client.

For instance when a draughtsman is engaged to turn designs of an article drawn by the client into formal manufacturing drawings, and the draughtsman can not then use the drawings himself without infringing the underlying rights of the client. The Court of Appeal quoted Jacob LJ’s view that the right question to ask is: “given that Parliament these first ownership in the author, is sensible that the parties intended to remain in that position?”

The decision of the Court of Appeal in Oraka gave the Court a further opportunity to both endorse and apply the guidelines set out by it Pacific Software Technology Ltd v Perry Group Ltd. The judgment should emphasise to practitioners that in considering whether it is appropriate imply a commission of copyright work produced by a contractor for a client regard should be had to the “commercial probabilities of the situation” over artificial or unduly technical requirements or interpretations provided by s21(3)(a).